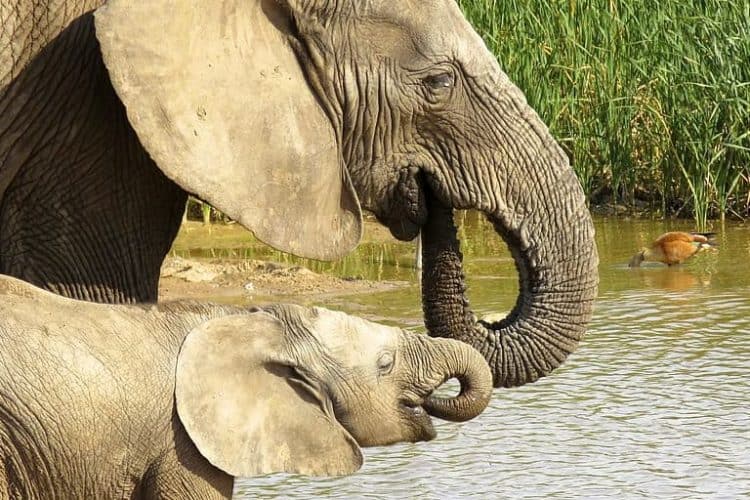 Mozambique’s 15-year civil war changed the face of its national parks, which underwent rampant poaching of big mammals, including elephants.

It did much more. It changed the face of female African savanna elephants (Loxodonta africana). The unusually large number of tuskless females at the Gorongosa National Park today can be traced back to the ravages of that war, which raged from 1977 to 1992, a recent study in the journal Science shows.

For Dominique Gonçalves, an elephant ecologist at Gorongosa, the altered profiles of her favorite animal cuts deep. She was born 29 years ago when the country stumbled out of the conflict, and to see scars of that plunder stretch into the present is sobering. Poachers targeted tusked elephants, bearers of valuable ivory that could be traded for arms. Only about 200 of an estimated 2,500 elephants in the park survived the massacre.

“It’s in our faces, we have done this,” Gonçalves said.

In the new paper, Gonçalves and a team of researchers from the U.S. and U.K. describe how the war-time cull continues to shape the herd today. “Poachers were preferentially killing animals with tusks and leaving tuskless ones to survive, so they were breeding and producing more tuskless offspring,” Gonçalves said. “We artificially selected them.”

Elephants are the largest living terrestrial beings, an ancient species that has roamed the planet for more than a million years. Tusks adorned their ancestors as well, persisting because of their usefulness. Tuskers use them to tear through tree bark, dig into dry soil for water, and sometimes to prod or rescue errant youngsters. Male elephants, endowed with bigger tusks than females, wield them in combat and to attract partners.

Elephants without tusks are an exception, a trait that shows up almost exclusively in females. But even then, only two out of every 100 female African elephants are born tuskless. After the civil war, the number of tuskless females tripled in Gorongosa.

Genetics and environmental pressures interact to determine whether a trait gets passed on from one generation to the next. One of the aims of the study was to pinpoint which slices of elephant DNA encode for tusklessness.

The researchers examined the genome of tusked and tuskless elephants, hoping to hit upon the critical anomaly, and narrowed it down to two candidates located on the X chromosome. This is a dominant gene, so even if the offspring receives a copy from either parent, they can exhibit the trait.

It still didn’t explain why so few bull elephants are tuskless. In males, the absence of tusks is often linked to injuries; it’s not congenital. The study authors landed on a possible explanation: it is a male-lethal trait. A mother can pass it on to a daughter, but if a male embryo carries it, the pregnancy likely ends in a miscarriage.

Still, the puzzle of tusklessness is far from solved.

“This is an interesting paper, exploring the challenging question of the genetic basis for tusklessness in elephants,” Anna Whitehouse, a South Africa-based elephant expert, who has studied elephant populations in that country’s Addo Elephant National Park.

Addo has fewer females with tusks, less than 10%. Over the decades, tusklessness has become more prevalent in the population.

Whitehouse said the pattern of inheritance from Addo did not support the hypothesis put forward in the new paper. According to the new study, the daughters of tusked mothers should all have tusks, she said. But Whitehouse’s team did not observe this in Addo, where four tusked females produced eight females, all tuskless.

“I am currently working with Addo Elephant National Park to understand the genetic basis of tusklessness in that population, but as of now, it remains a mystery,” said Shane C. Campbell-Staton, an evolutionary biologist at Princeton University and first author of the Science paper.

What is clear is that tusks make their owners targets of poaching, which continues to menace African elephants. Between 2010 and 2015, Mozambique alone lost nearly 10,000 elephants, or half the population, mainly to highly organized poaching.

This year, the IUCN, the global conservation authority, officially recognized for the first time that the African elephant is actually two distinct species: the smaller African forest elephant (Loxodonta cyclotis) and the African savanna elephant. Both are endangered. The population of savanna elephants has fallen by 60% in the past half-century.

The IUCN assessment cited habitat loss as a critical reason for the decline. Reclaiming lost ground will require more than just a rebound of numbers. Savanna elephants only occupy a tenth of their historical range in Gorongosa. A swelling herd restricted to a small area can run into trouble with humans.

And their numbers, at least in Gorongosa, have grown, up from 200 to about 1,000 today. “They can come back given the appropriate time, space and protection,” Gonçalves said.

While the elephants may return, it isn’t clear if tusks will make a comeback. The loss of this trait could have broader consequences, Gonçalves said.

By skewing their evolution, humans fiddle with elephants’ role in the ecosystem too. These jumbo foragers are masterful engineers of their surroundings. As long-ranging animals, they shape vast swaths of wildlands, stomping and chomping through them, sparring with trees, rearranging foliage. Tusklessness takes away one of their trusted tools and can ultimately change the floral and faunal makeup of their surroundings.

“It’s funny, isn’t it, we are impacting the way they look now, but it’s going to come back to affect us somehow,” Gonçalves said.

This article by Malavika Vyawahare was first published by Mongabay.com on 11 November 2021.

What you can do

Support ‘Fighting for Wildlife’ by donating as little as $1 – It only takes a minute. Thank you.

Fighting for Wildlife supports approved wildlife conservation organizations, which spend at least 80 percent of the money they raise on actual fieldwork, rather than administration and fundraising. When making a donation you can designate for which type of initiative it should be used – wildlife, oceans, forests or climate.