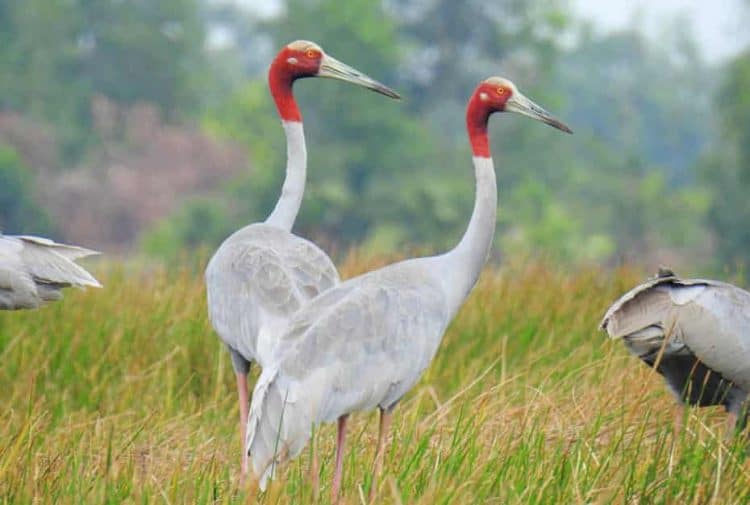 “Several years ago, I counted more than 300 cranes in the wetlands near my rice field,” says farmer Khean Khoay, as he reminisces about the regal-looking eastern sarus crane. Khoay’s village, Koh Chamkar in Kampot province, lies on the outskirts of the Anlung Pring protected landscape in south-west Cambodia, in the fertile and biodiverse Mekong delta.

The region has been enriched by centuries of silt deposited by the Mekong, the longest river in south-east Asia and a lifeline for millions who depend on its resources. But as more and more land is converted for agriculture and aquaculture, and the impacts of the climate crisis, such as erosion and saltwater intrusion, are felt, the area’s wildlife has become increasingly threatened.

Among the birds affected are the cranes that once visited the land near Khoay’s rice field in large numbers. NatureLife Cambodia, BirdLife International’s partner in the country, says only 91 eastern sarus cranes visited Anlung Pring this year. The future of these birds may lie in the hands of 16 farmers from Koh Chamkar village, including Khoay, who lease their land to NatureLife.

A consumer may not view the rice varieties we grow as premium quality but … these are the ones the cranes prefer
Bou Vorsak, NatureLife

At 176cm (just under 6ft), the sarus crane is the tallest flying bird and is classified as vulnerable on the IUCN’s red list of threatened species. But the eastern sarus crane (Antigone antigone sharpii), found in south-east Asia, is considered highly endangered: fewer than 200 are estimated to remain across the wetlands of Cambodia and Vietnam, a sharp decline from nearly 900 in 2002. About half of these visit Anlung Pring during their non-breeding period, arriving before the rice harvest in late December and staying until the dry season ends in May.

Oum Chrein, another farmer involved in the scheme, says: “When the crop has not yet been harvested, the cranes walk on the embankments around the fields and eat the grains from [the stalks at] the plot edges.”

The farmers who lease their land to NatureLife are paid 10 years’ rent upfront, calculated at 30% higher than their net income from the land. NatureLife, with the support of Cambodia’s ministry of environment and funded by IUCN Netherlands, uses the land to grow native short-grain rice varieties such as boka teourm and pong roluk (Khmer names), which are the cranes’ favourites. At harvest time, half of the crop on the 17 hectares (42 acres) of leased land is left to supplement the diet of the cranes and other birds.

NatureLife also offers the farmers the option of a daily allowance for cultivating the land, which provides a regular income. Bou Vorsak, acting chief executive at NatureLife, says: “We commit to the farmers that we will use the land only for growing rice and that the soil will remain suitable for cultivation in the long term.”

This arrangement also prevents farmers from selling land to developers or changing its use, thus retaining the area for visiting cranes for the next decade.

It is not a scheme, however, that makes money. The first harvest from NatureLife’s leased land programme was in December 2020. The high salinity conditions, along with the use of organic fertilisers and pesticides (instead of chemical ones), meant that the yield was not high, with less than one tonne of rice harvested a hectare, compared with the usual two tonnes. “We are aware of the yield limitations but we don’t mind as we are keeping [half] the rice for the cranes,” says Vorsak.

After milling and packaging, most of the harvested rice was bought by a local Covid-relief effort, while the rest was sold on the open market. One tonne was set aside to be used as seeds for the next planting season.

The rice did not fetch a good price, says Vorsak, because “we focus on the rice varieties that the cranes prefer. These native varieties are short-grained and not very soft after cooking. They cannot compete with jasmine rice.”

Jasmine rice, which is popular internationally and earns a premium price, is long-grained and aromatic with a soft texture after cooking.

Vorsak adds: “A consumer may not view the native rice varieties we grow as premium quality but we are committed to them, as these are the varieties that the cranes prefer.”

Farmer Tom Ke, also from Koh Chamkar, didn’t know much about the eastern sarus crane until he joined another NatureLife project earlier this year. “I only recall seeing this strange, tall bird with a red head,” he says. “I have now started to pay more attention to them.”

Under this new scheme, participating farmers leave 5% of their rice crop unharvested for the birds. They receive seeds at a subsidised rate, organic fertilisers and pesticides and training in organic farming techniques are provided for free by NatureLife’s partners. “With more food available for them, I hope they won’t become extinct,” says Ke.

The farmers have to agree to 12 guidelines, the most important being that they will cultivate a rice variety preferred by the cranes, they will not use chemicals on their crops, they will not hunt or snare visiting wildlife, and will not encroach on protected land. If the farmers adhere to all criteria, NatureLife pays the market rate for the 5% of the crop left unharvested.

More than 40 farmers from Koh Chamkar and nearby Chress village have joined the initiative. In August, they planted boka teourm on their plots, bringing almost 38 hectares under the programme. The first harvest will be in December, 5% of which will be left standing for the cranes.

Vorsak is hopeful that these crane conservation initiatives are just the beginning and will garner more support.

“Together with these landowning rice farmers and private landowners, NatureLife’s long-term vision is to protect more than 1,000 hectares of the landscape for the cranes,” he says.

This article by Anne Pinto-Rodrigues was first published by The Guardian on 20 November 2021. Lead Image: Each year, the distinctive red-headed eastern sarus crane arrives in Cambodia’s Anlung Pring reserve in time for the rice harvest. Photograph: Courtesy of NatureLife Cambodia.

What you can do

Support ‘Fighting for Wildlife’ by donating as little as $1 – It only takes a minute. Thank you.

Fighting for Wildlife supports approved wildlife conservation organizations, which spend at least 80 percent of the money they raise on actual fieldwork, rather than administration and fundraising. When making a donation you can designate for which type of initiative it should be used – wildlife, oceans, forests or climate.

Ex shelter dogs Lucy, Conrad, Yoyo and Freddo all part of the day care pack today
Tailless Whip Scorpion, The Best Pet Invertebrate?
Nubia: Cat Guardian
Mews and Nips: Missing Cat Found After His Human Recognized His Meow During Phone Call to Her Vet
Kitten Sitting in the Middle of the Road ‘Waiting’ for the Right Person to Come Scoop Him Up